I've been busy with coding the mobile client and I'm hoping to release a first version in a couple of weeks. I've just published what I have so far on Gitlab. I put it under GPLv2 (or later) this time around. 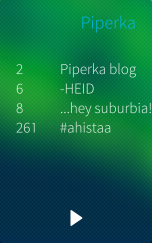 This shows the app running in minimized mode, or in cover mode as Sailfish calls it. Tapping on the button on it will open the app and open the first comic on the list in reader mode. The default sort mode for comics is to put the comics with least new pages first. In this case, that would be the second newest page on this blog. 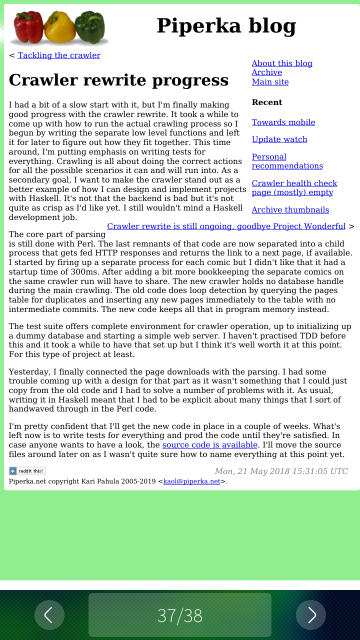 This is the app in reader mode. Clicking on the button at the bottom opens a list of all pages in the comic and the navigation buttons work as you'd expect. In this case, the comic would have two unread pages (never mind that this is with stale data from my development environment). Tapping the forward button once would show the newest page in the archive and update the user's bookmark. Another tap would mark the whole comic as read and open -HEID for reading.

I've had all sorts of fun with connecting signals with all the ways how subscriptions can change and that all seems to work now. All together it's at over 4000 lines of QML markup and code. The main feature still missing before pushing this to openrepos and Harbour is bookmark storage and handling for unregistered users. I'm hoping that it would make the app more approachable towards new users to not insist on coming up with a user name and a password right away.

I still haven't tried the app on an actual phone. I have one but at this stage it's easier to just run it in the emulator. The WebView component used by Sailfish is pretty old and I hope it won't cause trouble with viewing comics.

Once the dust has settled somewhat and I've seen what the reaction's been to my app (hopefully not nil) I'll start looking into making an Android version. I'd expect it to be a lot smoother sailing than with the initial Sailfish version. Not that this was all that difficult either, it just took some time to get here. I'm not promising any time frames for that version and I may need to take a bit of a break.

If anyone's interested in providing translations for the app then you're welcome to. I'll maintain the Finnish version myself.